Important reminder: All dogs must be on leads, and remember to keep clear of all livestock, especially sheep and sheep with lambs and … please leave all gates as you find them. Thank you.

We started at the Balure Road end and went as far as The Mill and back in a loop. It was a very bright day; perfect walking weather. An easy walk, impossible to get lost.

Once through the gate, the road led us down past Bailuacraich farm, with the Firth of Lorn ahead. After a single bungalow on the left, there is a turning to Port Moluag (which we didn’t take) but where a waterfall was gushing into a stream. It is here Saint Moluag is said to have arrived on the island during the sixth century (CE), and initially based his ministry, which eventually spread throughout much of what is now Scotland and northern England, or so the story goes. Evidence for this period is sketchy. 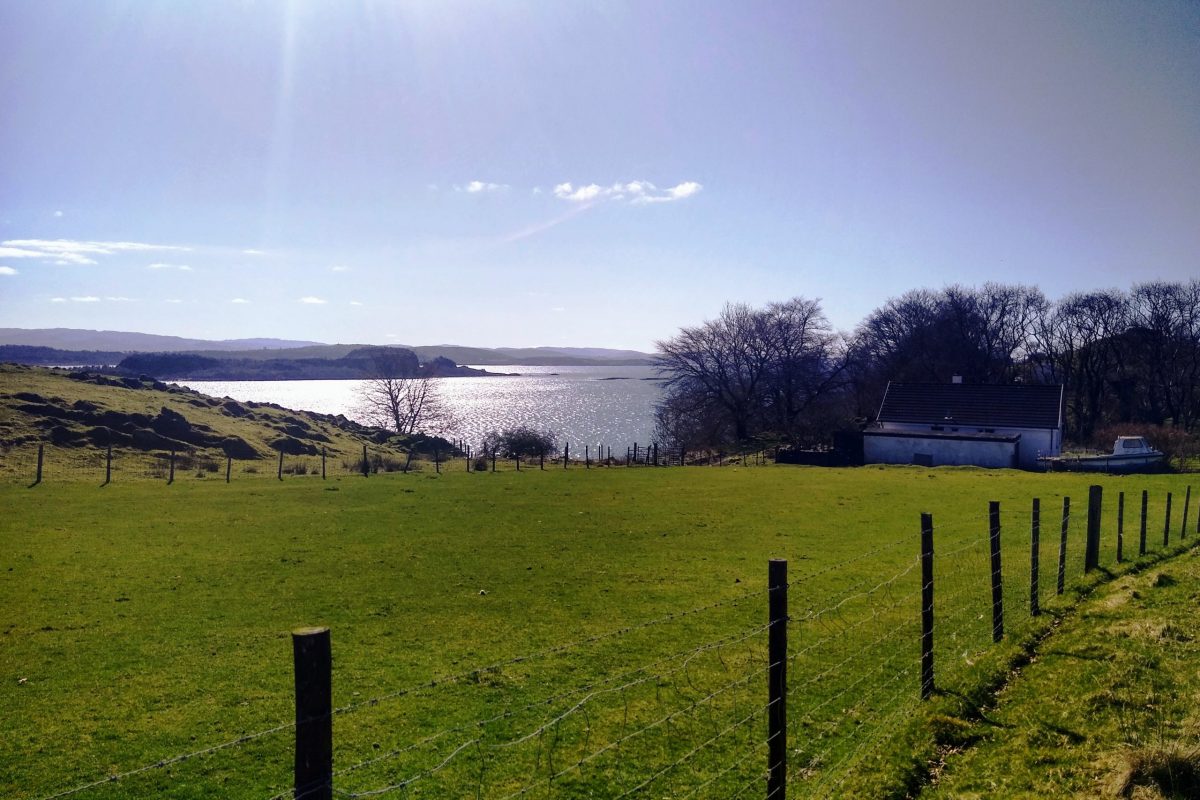 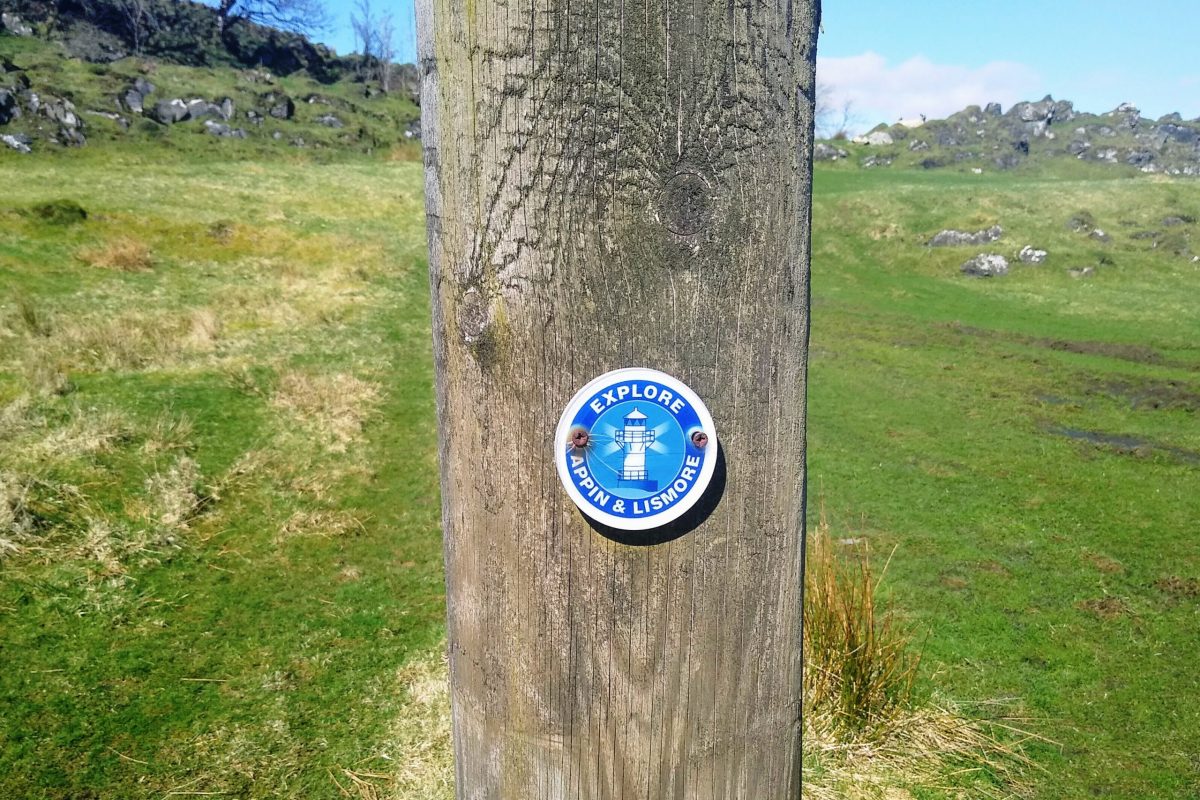 The next gate led into Balure and the broch was on our left. Through another gate sporting the Explore Appin and Lismore badge, we reached the turning into a field with the broch ahead and a barn on the right.

Compared to some, but not others, this 2000-year-old broch is reasonably well preserved, with 15-feet-high walls and a visible internal passage—now barred to prevent sheep entering—lying between ten-foot-thick walls. Its position may seem to be defensive with such great visibility (in good weather), but the walls would have been easily scaled and there are no lookout gaps. Some suggest it is simply a very showy farmhouse. Because it is delicate, it is most important that visitors treat it with care.

As part of the Lismore Landscape Project, Dr Ewan Campbell and colleagues from the Department of Archaeology, University of Glasgow, excavated areas of the interior and surrounds of Tirfuir Broch in 2004-5. You can read about this on the Comann Eachdraidh website and see what they unearthed. There is also lots of information about Scottish brochs on the Historic UK website. 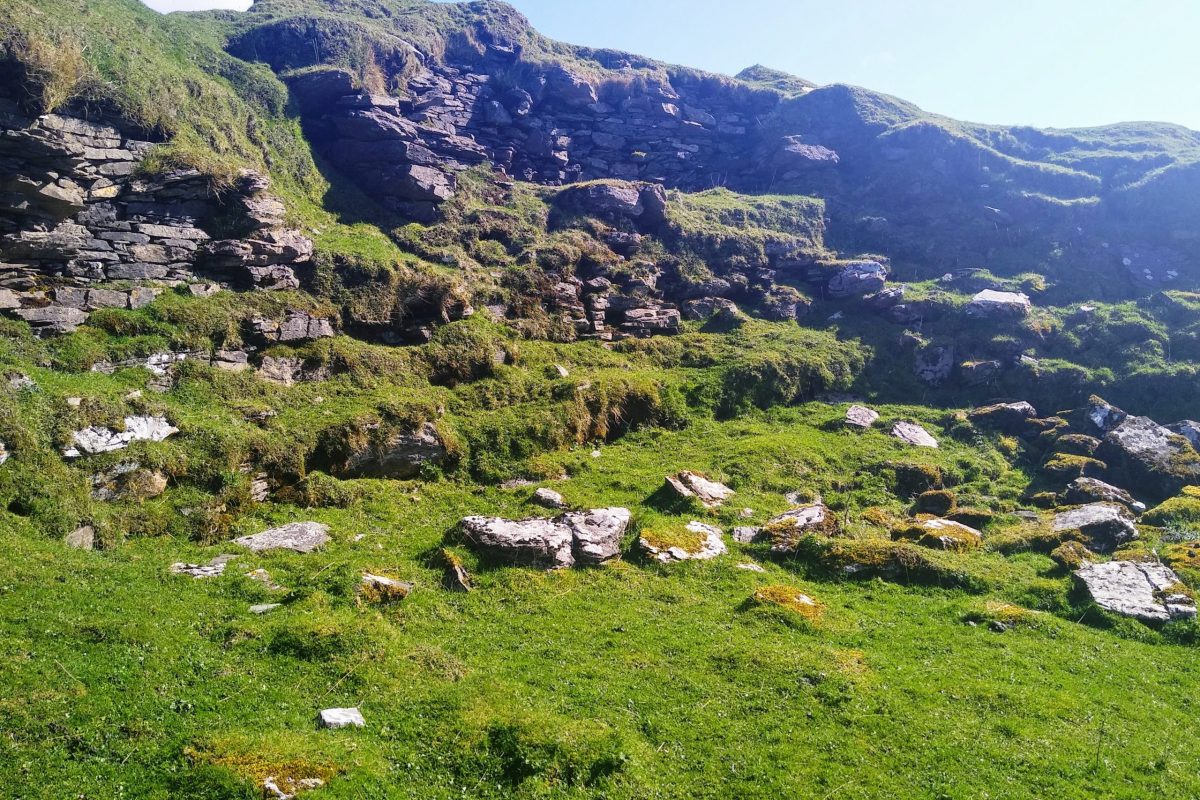 We walked south towards a gate. To the right lay the ruins whose inhabitants all died tragically, and I imagine painfully, of scarlet fever. In the middle of a very large open field, my eye was caught by a mink, but only because it moved briefly and I recognised it. Otherwise, it was a small patch of black earth. Mink have been a disaster on Lismore and everywhere in Argyll. 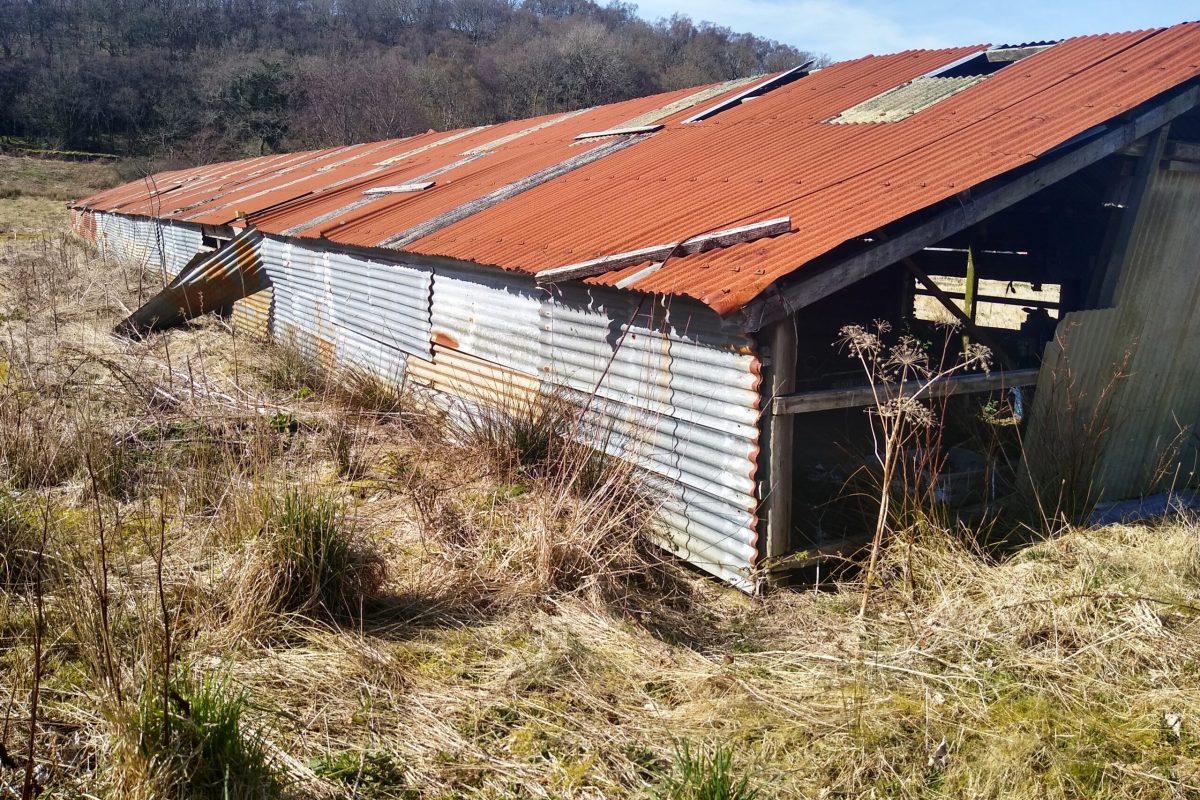 Appin had one of the largest farms in Scotland and there were always escapees, but when it closed in the early 1990s, terns, gulls of all kinds, ducks and ground-nesting birds began to struggle and I have watched their numbers dwindle around my shore alone. The morality of those who farmed them and those who dreamt of putting an expensive fur around a woman’s shoulders is, alas, questionable. When farming puts profit before everything it becomes a crime. I miss not seeing terns. And that is the least of it. I wish they would clean up after themselves too. This site is on the cycle path north. Not pleasant. There were at least three sheds and endless cages, now just rusting heaps. 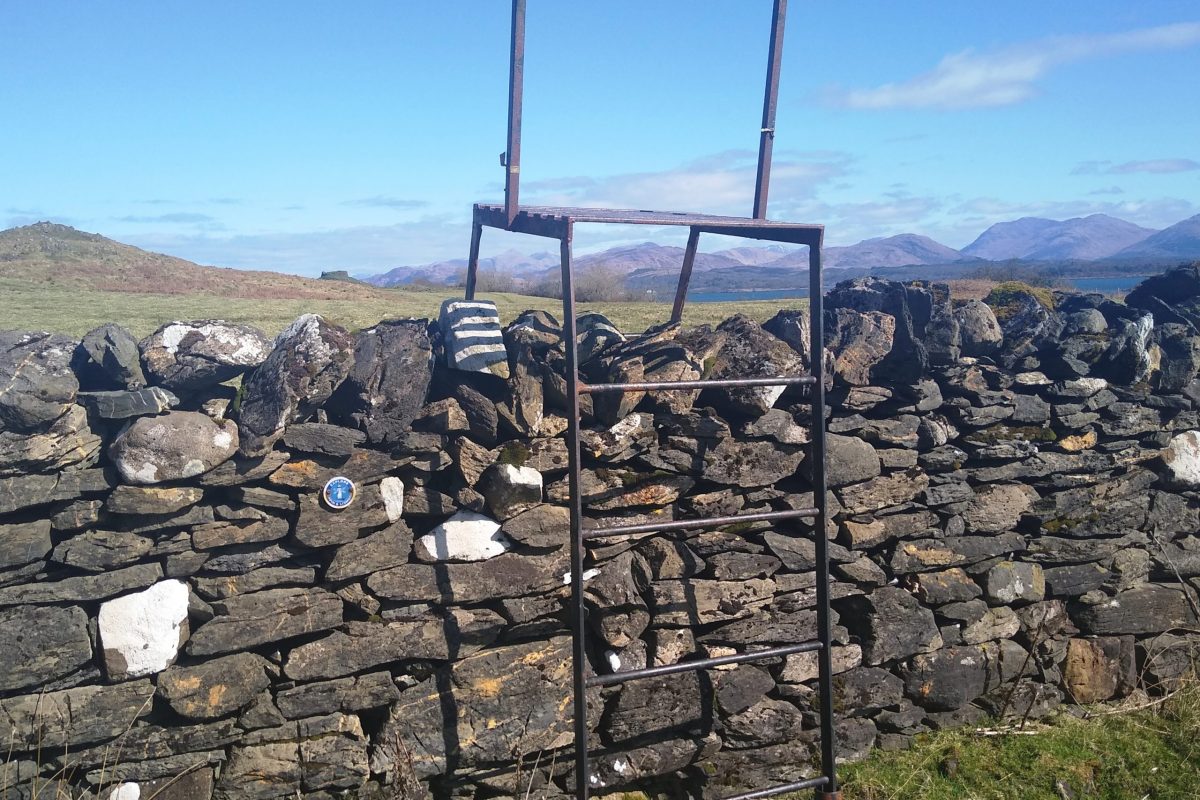 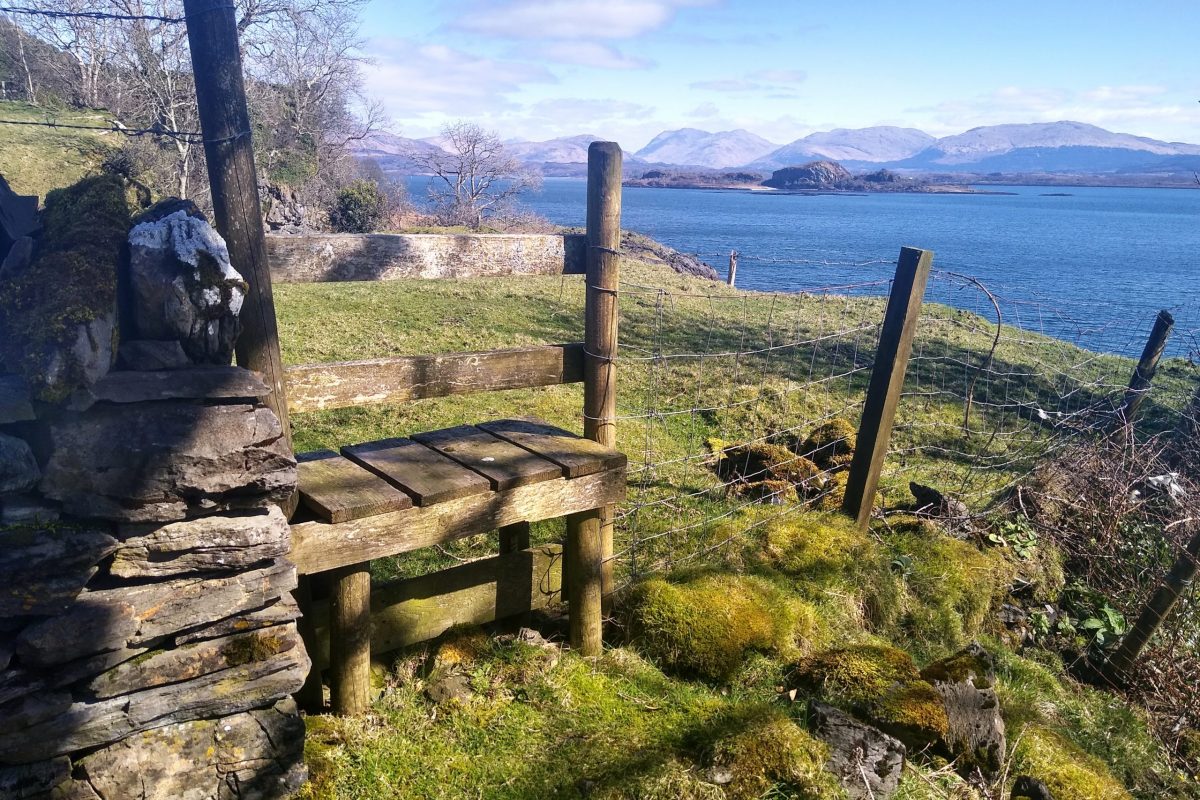 We headed for another Explore Appin and Lismore stile, and eventually reached a very obvious rising tractor path—there had been a less distinct one earlier—leading up to the cliff edge, with the raised beach quite far below.

We crossed a wooden stile which used to be a sheep hole, says H, climbed up on an obvious path and down again with The Mill straight ahead. We followed the fence round past an opening and then began to head back beside The Mill race. After we were through a gate ahead, we kept to the left near the wall, as this field is cultivated. Several pieces of Lismore’s outdoor agricultural museum were displayed (identification anyone?). I always wonder who the last person was who handled them. 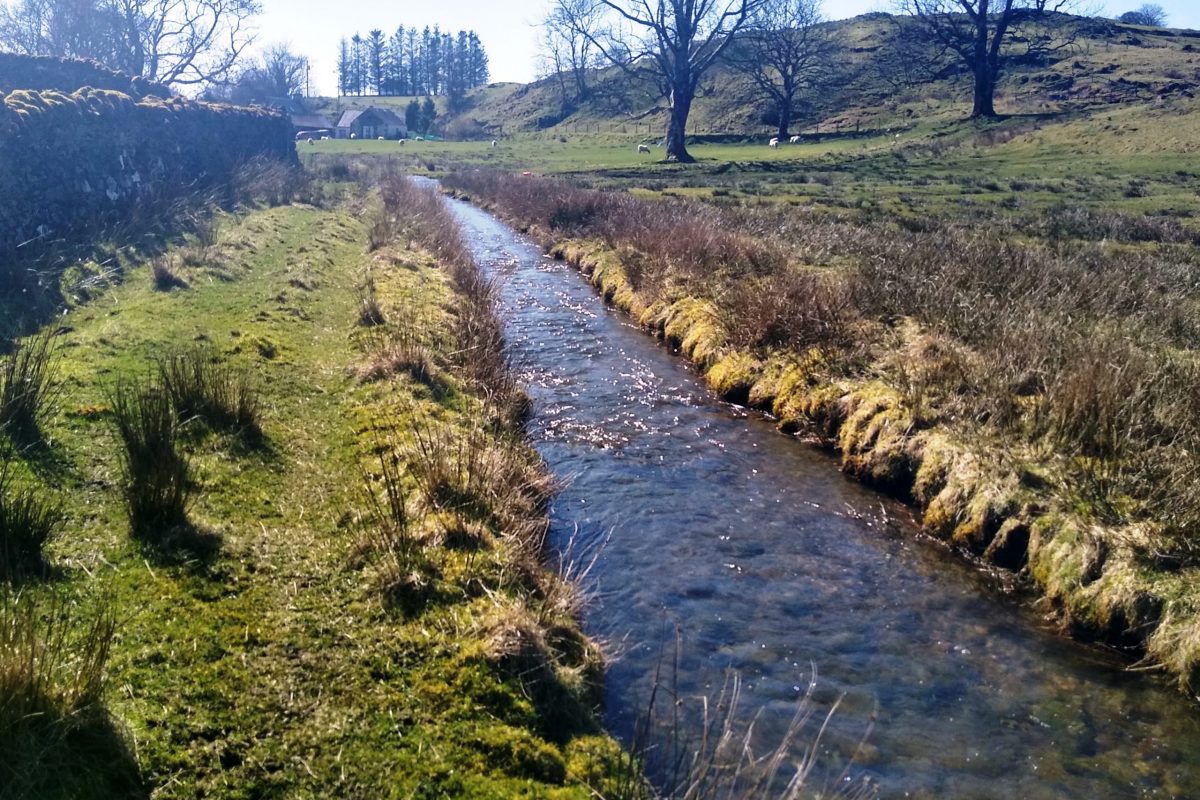 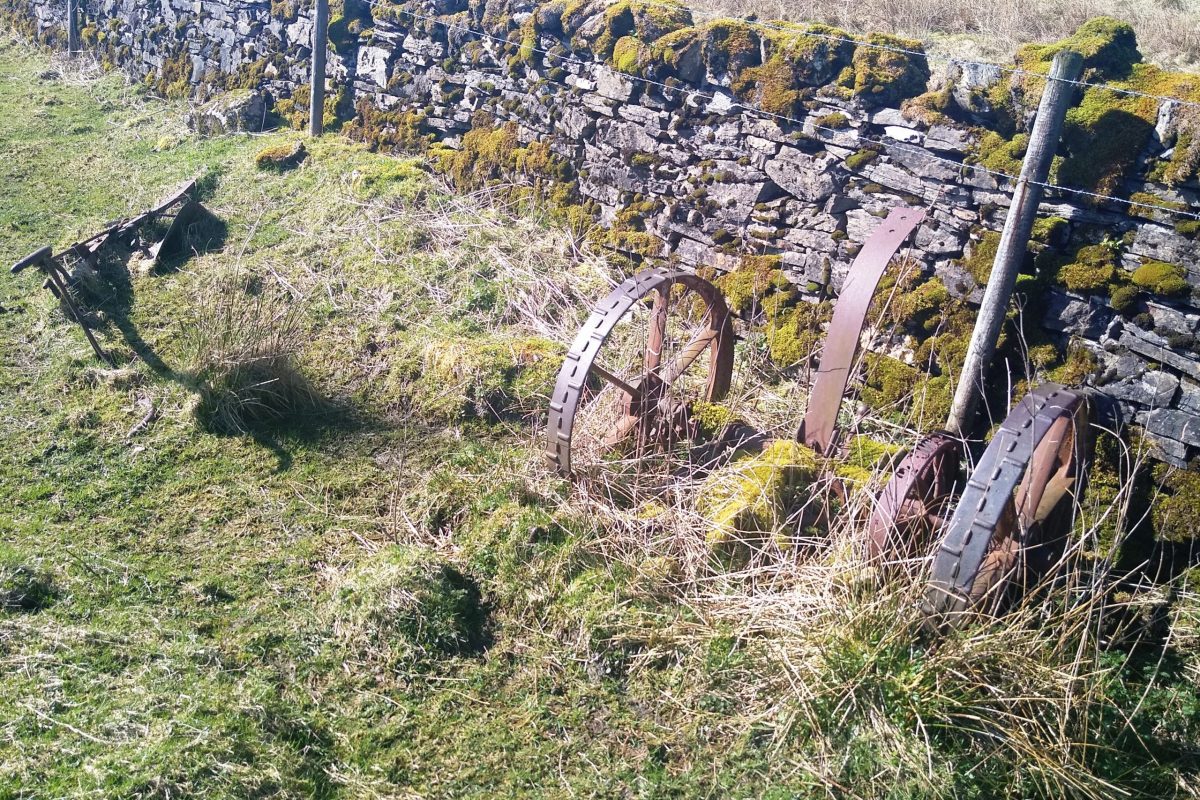 After another gate, which was open—always leave them as you find them—we were near a line of ruined dwellings. I know nothing about the fate of these people, apart from the general assumption that they moved away, or were forced away when the sheep came. Any information would be gratefully received. 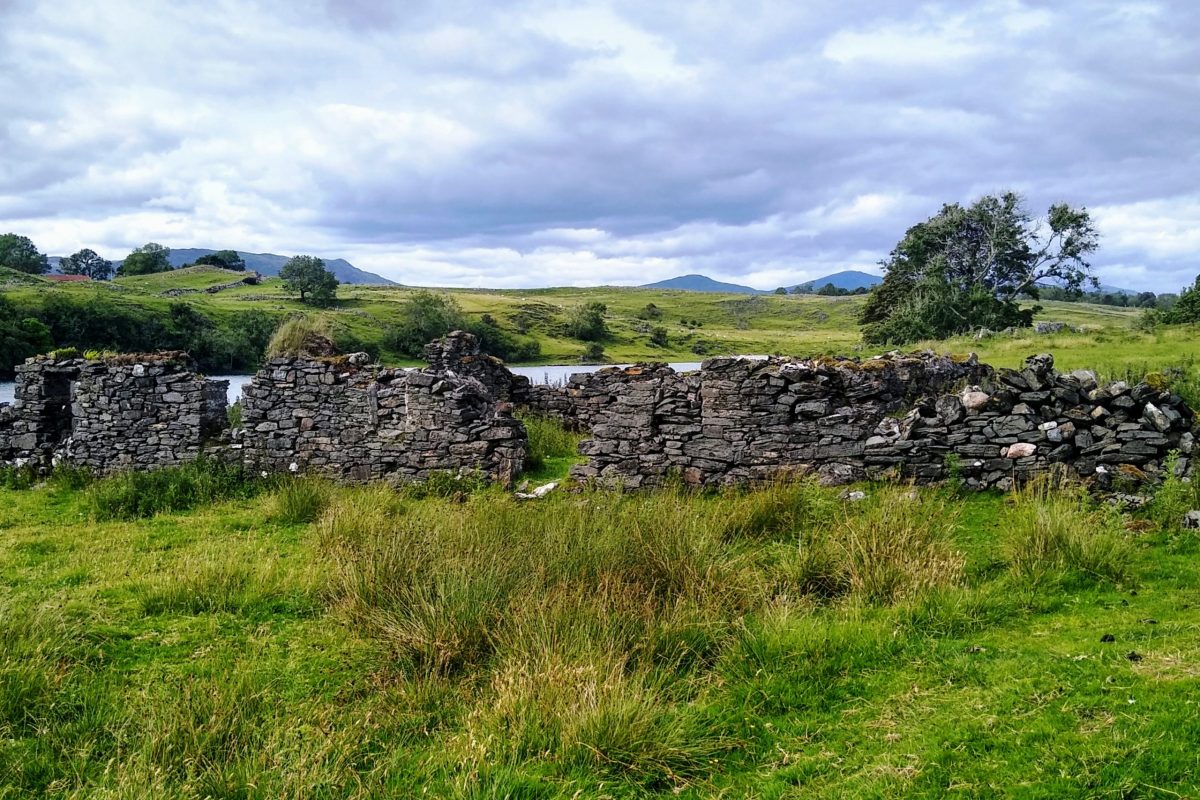 We walked beside Loch Balnagown, towards a wooden gate, before which was another ruined house with a splendid fireplace, and a possible bible slot in the wall. Through the wooden gate, we joined a tractor track beside some extraordinary trees, the loch on our left. 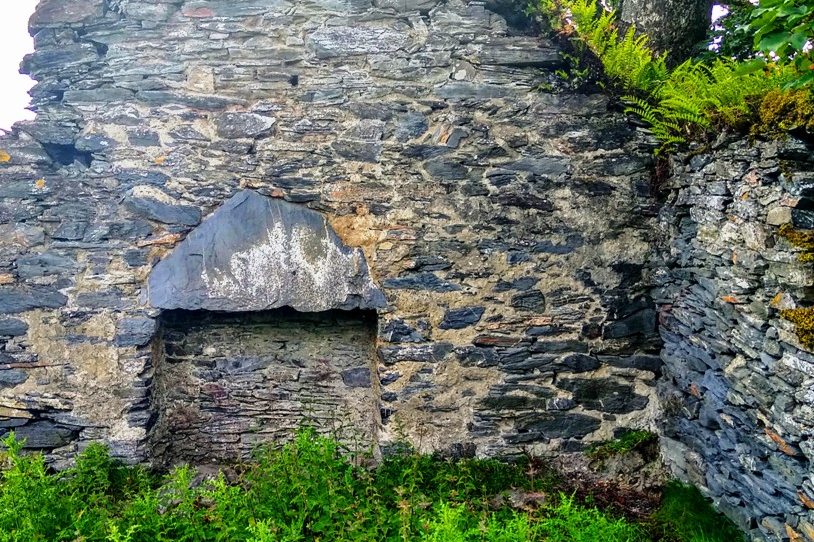 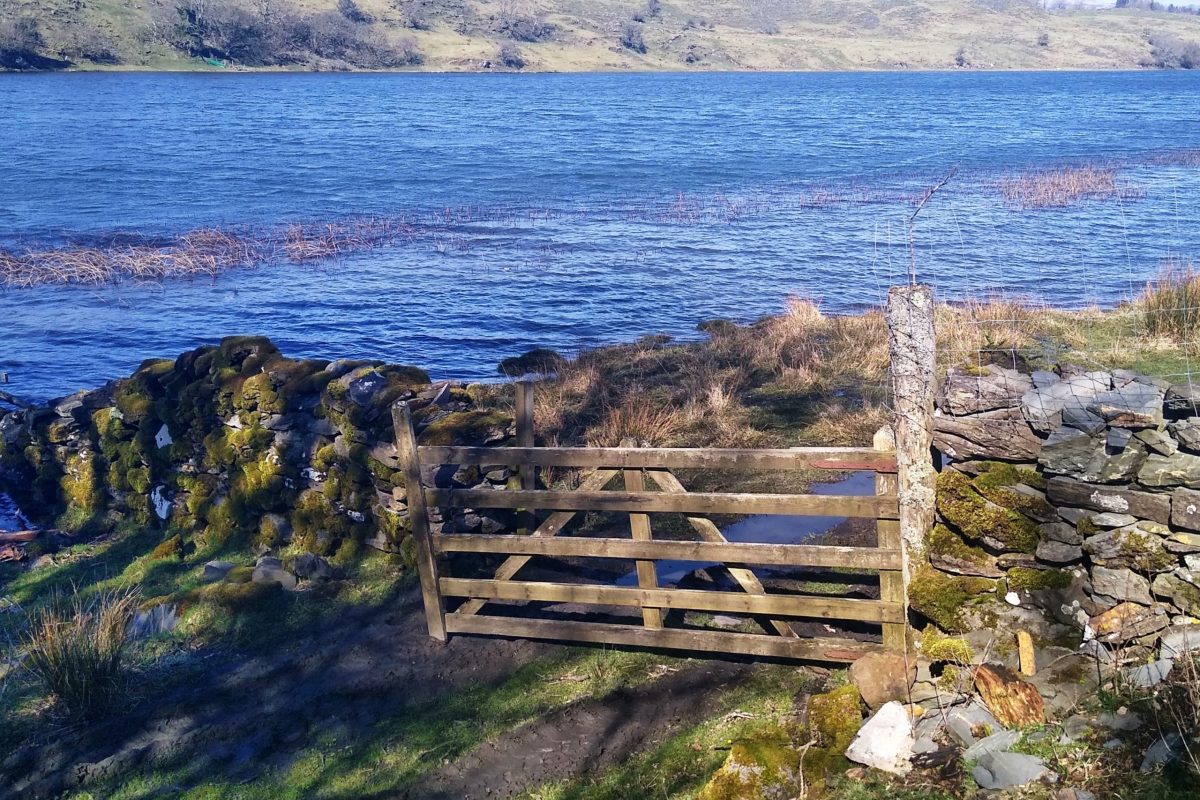 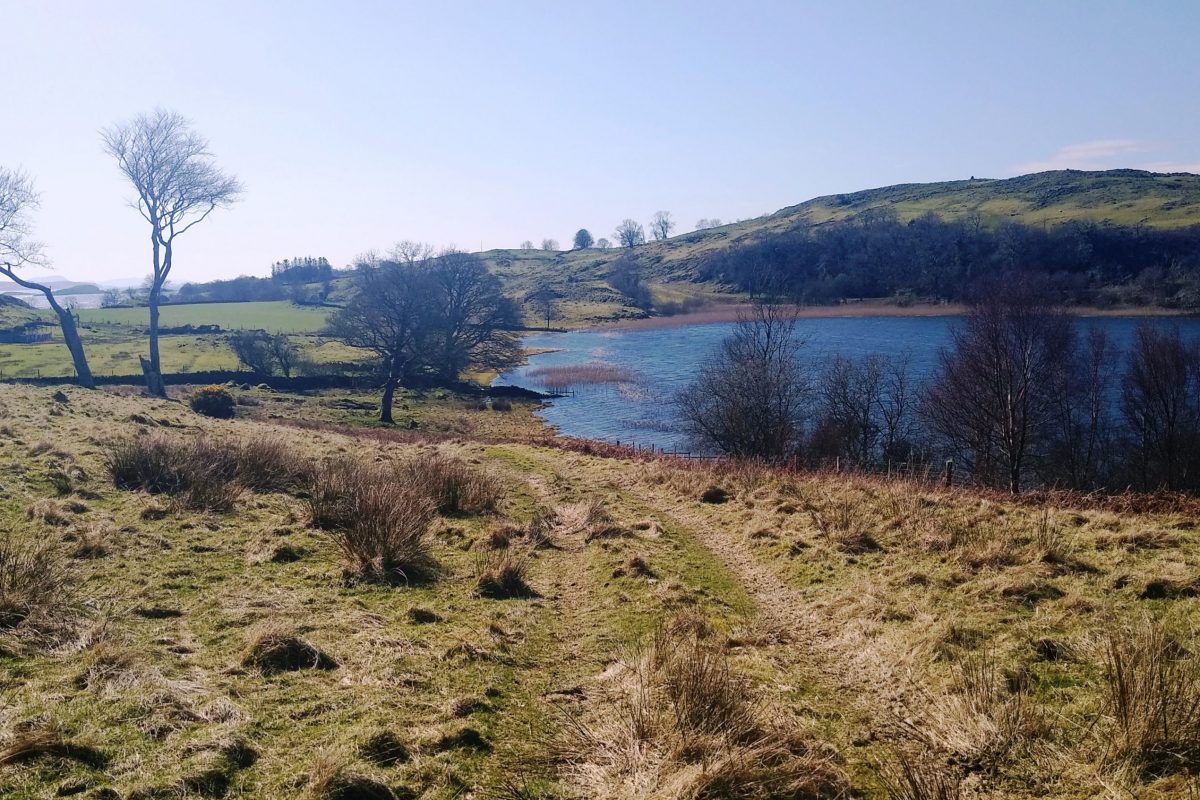 Before the top of this rise we could see Balure farmhouse and the broch. We took the right-hand fork to join another tractor track continuing towards a large ruin with an ash tree collapsed on its roof.

We skirted the right-hand side of the ruin and saw that the house had been well built but, having been shattered by the tree, its corrugated iron roof was lying scattered, slowly disintegrating.  H once had a bullock that ate a piece of corrugated iron which got stuck in its mouth. Horrible and very serious. There was a chain attached to a large stone that may have been trying to keep the roof on. 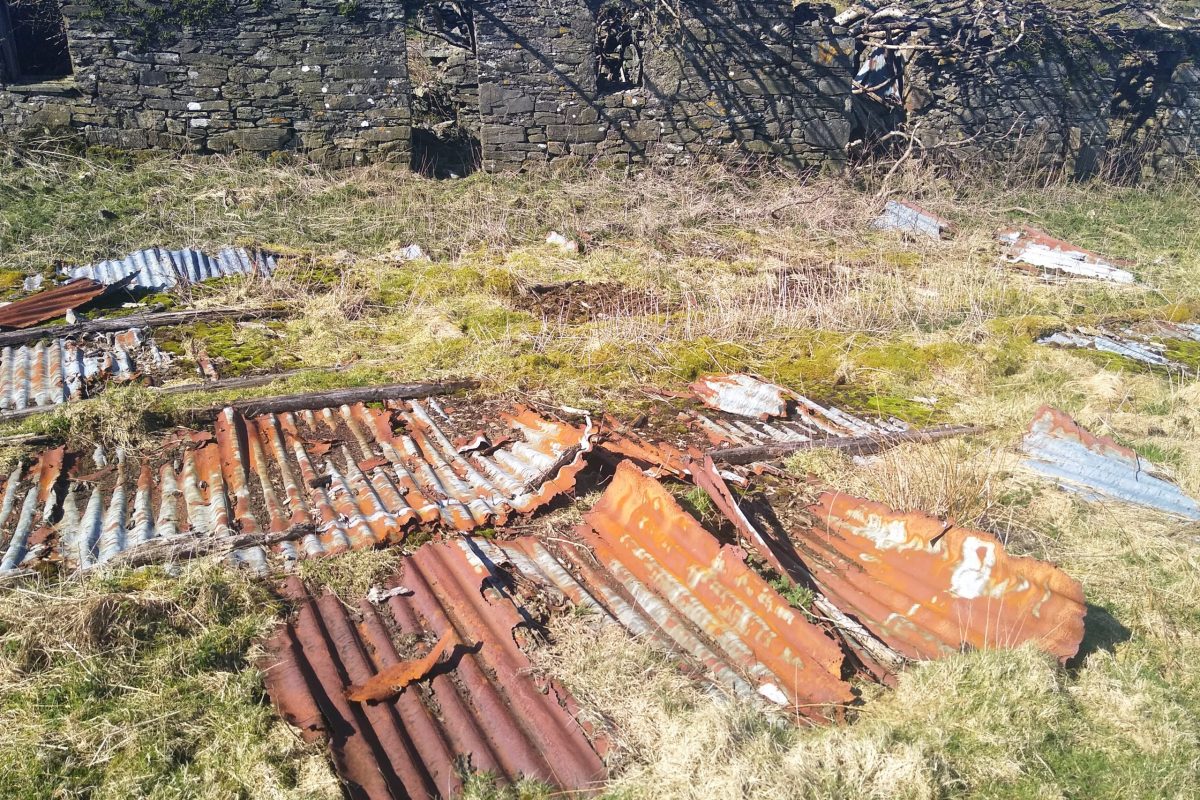 As we were heading towards Balure House, the first wheatear of the season appeared, and then a large patch of frog spawn. The Broch and the barn were on our right. Straight ahead, between the tips of Sgòrr Dhearg and Sgòrr Dhonuill (Dhòmhnaill)—the two peaks of Beinn a’ Bheithir behind Ballachulish on the mainland—was the spot we were aiming for.

Avoid the Balure House private road on your left, where the late Dorothy and John Livingstone raised their two sons, Iain and Andrew; John—the farmer and much else—and Dorothy—many things including, for many years, the taxi—both much missed. Ahead, through another gate, we went diagonally across a field between two clumps of trees. And after the next gate it was straight ahead again, between the twin peaks on the mainland.

A very small, cute gate needed care (wire across the top), and ahead, a house on the Balure Road with a commanding view, was soon visible. This had its own mounted agricultural museum piece. 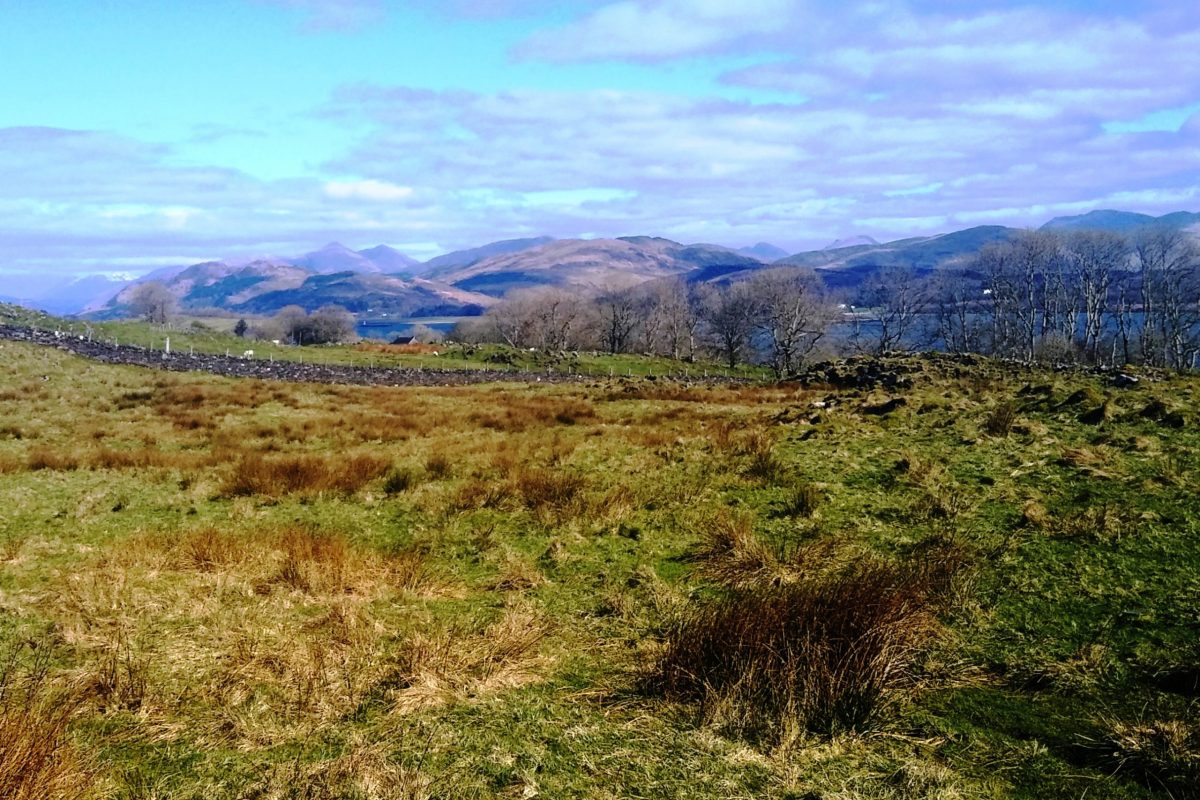 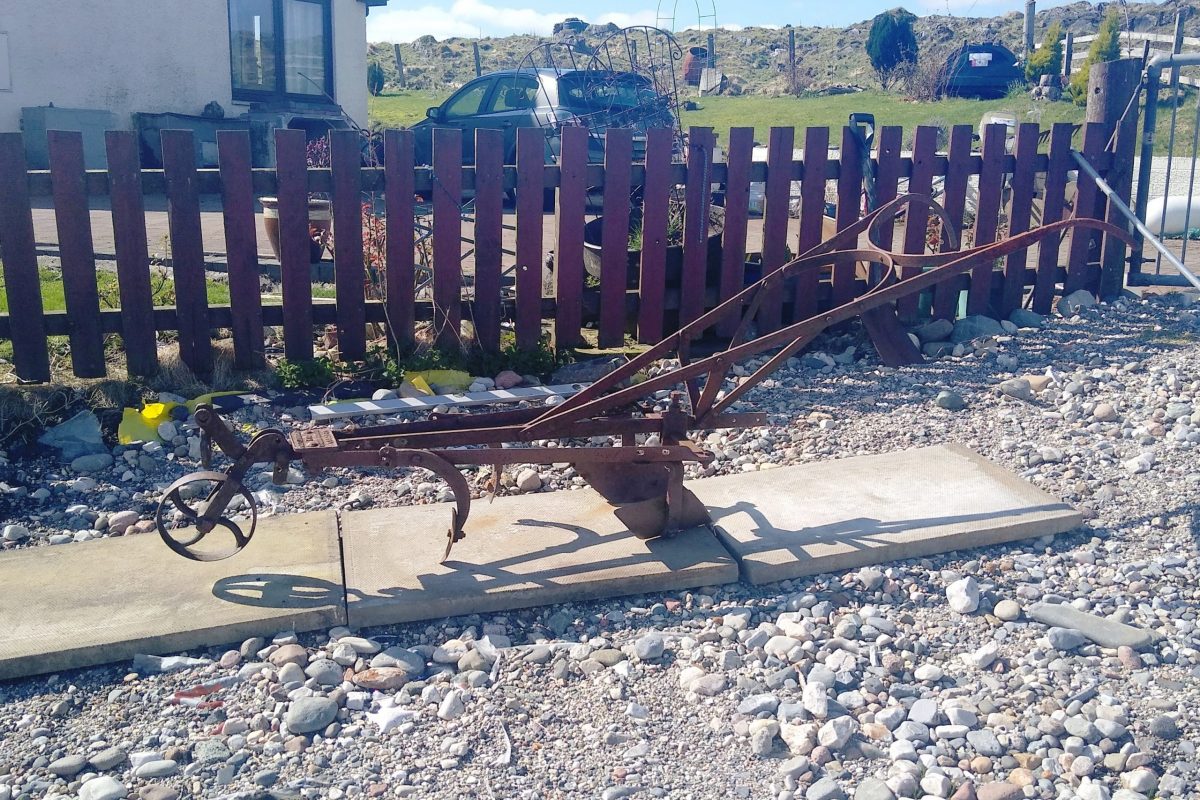 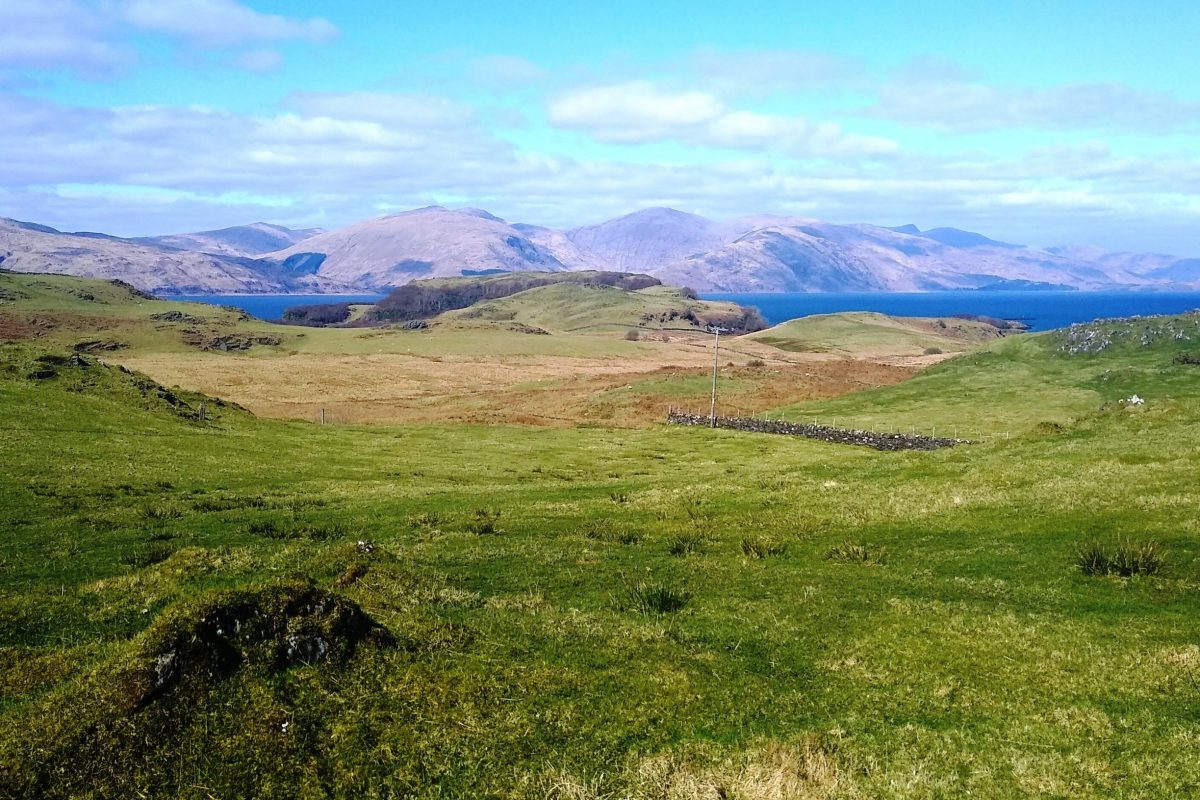 From the main road we looked across at Alasra peninsula and the Morvern hills.

Start at the Point to Port Appin ferry and, opposite the phone box, follow a sheep path beside Point House. In the season you can hire bikes at the ferry which you may like to combine with other walks, although not suitable for this one. […] 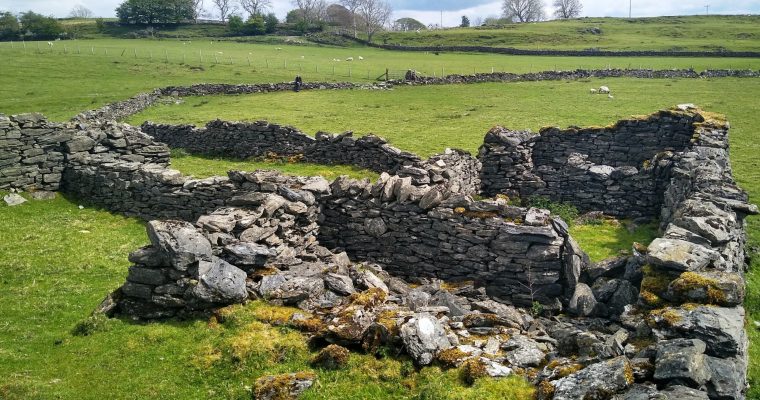 We took the small gate on the north side of the church and walked through the Glebe, behind the new graveyard and heading for Balimackillichan. The new grass was coming quite quickly; the rookeries were busy. A chestnut tree stood fully leaved. A small gate […]

When lockdown arrived with the COVID-19 pandemic in March 2020 I decided I wanted to walk all the bits of the island I had not yet set foot on, starting with the raised beaches, as we live on one. The walk section of this site is the result. We were lucky we didn't have to shield. Raised beaches surround the island, as they do a great deal of Scotland and are the result of the ice age causing the land to rise up after the great weight of ice lifted. They are a sort of plateau before they meet a cliff.

As Lismore is a small island, many walks crisscross one another and it is necessary to repeat some historical and heritage information. This is avoid your constantly having to follow links to elsewhere.